How We Learn to Compartmentalize

“People normally cut reality into compartments, and so are unable to see the interdependence of all phenomena. To see one in all and all in one is to break through the great barrier which narrows one’s perception of reality..” ~Thich Nhat Hanh

“I think the difficulty is this fragmentation. All thought is broken up into bits. Like this nation, this country, this industry, this profession and so on… And they can’t meet. Wholeness is a kind of attitude or approach to the whole of life. If we can have a coherent approach to reality then reality will respond coherently to us.” ~David Bohm

Modern educational institutions were designed to train children to see and experience the world divided up into parts, thereby disconnecting them from the unified whole (of nature, community, universe) that in truth we all belong to.

Science, art, history, literature, math, music are presented to children as being completely separate from one another. They don’t learn how these are in truth interdependently connected. Children are tested, measured (and compared with each other) for how well they can remember what they were taught. This creates a further sense of alienation and disconnection.

Over time, our consciousness compartmentalises, so that by adulthood we come to see ourselves as individuals separate from the universe. We learn to experience life and see the world divided up into parts, as fed by the media and taught when we were institutionalized (as children).

Think about that. Let it sink in. Most of us were institutionalized as children.

And so civilization’s people have been trained to disconnect from the wisdom of our bodies, our spirit, our creative intuitions and Nature. Alienated from our deeper selves (and the world around us) many feel dissatisfied, fearful and lonely.

This is how we were programmed to think, act and be. To imitate, regurgitate, fear and obey. Then to fill the void within us by fitting into social molds, doing meaningless work for those with more power (and money) and consuming, endlessly consuming…

Being out of touch with the interrelated structure of reality creates a spiritual void and perceptual blindness, as Martin Luther King, Jr. has described. It’s a delusion we must awaken from, because, “It really boils down to this: that all life is interrelated. We are all caught in an inescapable network of mutuality, tied in a single garment of destiny. Whatever affects one directly, affects all indirectly. We are made to live together because of the interrelated structure of reality.”

Much of the chaos and destruction we see reported in the media is rooted in how billions of compartmentalized human minds are responding to the alienation, standardization, ignorance and division that has become normalized with our high-tech civilization.

People are reacting fearfully to the experience of not being fully whole, not fully connected to our communities, to this incredible Universe and the wider Community of Nature that supports us (and in truth brought each of us into being).

“We live in an age where the delusions and ignorance of modern civilizations have become the global norm.  Most of the problems in our world stem from how “civilized” humans have compartmentalized life in such a way as to hide reality from ourselves and other people. A fantasy view of reality, what Buddhists call samsara, has been packaged, marketed and sold to the masses by those in positions of influence and power.

This has been done on purpose, has been the “operating code” of  hierarchical human civilizations for thousands of years. Our leaders don’t want us to know what is really going on, with anything. This was as true of pharaohs and kings in the past as it is of large corporations, governments, billionaires, military leaders and media elites now.

The compartmentalization of knowledge and intentional hiding of facts is how those in power maintain control. They hide how food is produced, how wars create future terrorists (and civilian casualties), how education is being intentionally dumbed down, how the earth’s ecosystems are being destroyed, how politicians are corrupt, how democracy has been rigged, how debt enslaves people and wealth is accumulated unfairly.” Source: Awakening from the Cult of Ignorance

How then to awaken from this compartmentalization of our consciousness? How to more deeply experience the beauty of our existence, understanding how we are embedded in a miraculous ever evolving and living cosmos?

How to become wiser as a species? How to creatively transform our institutions and cultures, so as to solve our problems and teach our children the deeper truth of their wholeness?

THIS is the challenge of our times.

“A human being is a part of the whole called by us universe, a part limited in time and space. He experiences himself, his thoughts and feeling as something separated from the rest, a kind of optical delusion of his consciousness.” ~Albert Einstein

“A basic principle of the indigenous world view is that all things in the universe are connected.  We believe that we are a part of everything and that everything in the natural world is alive—conscious—even the stones, the Earth, the stars. Westerners seem to isolate themselves and think they are separate from their environment. They believe that portions of creation can be isolated from other parts; that one set of people is separate from another set; or that people are different from the animals. In the Western view, it doesn’t matter what happens to animals because we’re apart from them; superior, actually. In the indigenous world view—or what I would call “reality”—we are all a part of creation. The universe is unified.  It’s inaccurate to think you can separate pieces out. Human beings are the only species who have forgotten that.  When we remember, we live in balance and strive for harmony with all things. That is the most fundamental difference between the Western and indigenous world view. ~Spencer Martin (Se Olum)

* Toward a More Creative & Holistic Model of Education * Real Learning is a Creative Process  *  Children Need to Be Free to Learn  * It’s a Pink Floyd World – Welcome (Back) to the Machine  * Paradigms are Made for Shifting *  How We Participate in the Creative Life of the Universe  *  The Circle of Courage – Native American Model of Education * How Wisdom Grows – Educating Hearts & Minds  * “Dismiss Whatever Insults Your Own Soul” – Walt Whitman * Systems Thinking – Rediscovering Nature’s Paradigm * Perpetual Curse of the Warrior Mindset * Systems Thinking: Seeing How Everything is Connected * Shifting Paradigms: Aligning with the Wisdom of Nature * 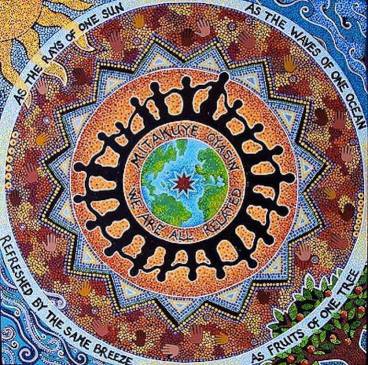 Co-creator and Admin of the Facebook pages "Tao & Zen" "Art of Learning" & "Creative Systems Thinking." Majored in Studio Art at SUNY, Oneonta. Graduated in 1993 from the Child & Adolescent Development program at Stanford University's School of Education. Since 1994, have been teaching at Seinan Gakuin University, in Fukuoka, Japan.
View all posts by Christopher Chase →
This entry was posted in Creative Systems Thinking, education reform, Learner-centered education, nondual awareness, zen. Bookmark the permalink.

11 Responses to How We Learn to Compartmentalize