Posted on February 26, 2014 by Christopher Chase

“Every particular in nature, a leaf, a drop, a crystal, a moment of time is related to the whole, and partakes of the perfection of the whole. Each particle is a microcosm, and faithfully renders the likeness of the world.”                      ~Ralph Waldo Emerson 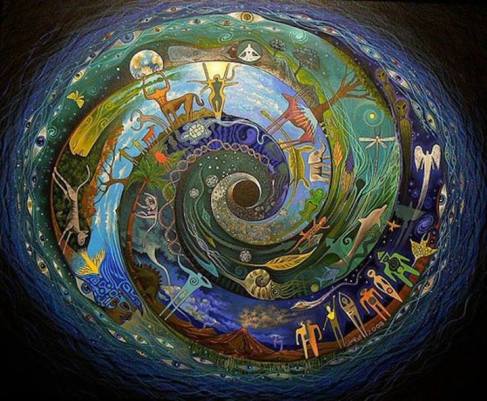 If you look around yourself carefully, you may notice that our Universe consists of a unified network of systems nestled within systems. Your physical body is composed of various organ systems, each maintained by groups of cells, molecules and atoms. Our families and social communities are embedded in ecosystems, the biosphere, the solar system, our galaxy and the universe.

From this perspective, human beings are as much a part of nature as the oceans, trees, and stars. What’s more, there seem to be certain patterns and processes which occur in natural systems everywhere, guiding the development of individuals and galaxies alike.

The ideas in systems theory are based on careful observations of natural phenomena. They tell us how nature works, how all things fit together into larger systems and communities. Its concepts refer as much to cells and solar systems as to nations, corporations and basketball teams.

While many of the words and concepts of systems theory are new, systems thinking is not. Systems thinking is a way of looking at the world ecologically and holistically, where one focuses on patterns, connections and processes, and how seemingly separate things form coherent wholes.

Systems thinkers have been with us since ancient times, providing wisdom and guidance in all cultures and every area of human activity. Some of the ideas presented here have their roots in ancient Greece, or in Eastern systems of thought, such as Taoism or Zen.

Many indigenous communities have long had an awareness of the way nature’s systems worked. They observed their environments carefully, watching the ways animals lived, how the natural world moved in cycles and patterns. Elaborate myths and rituals have helped native people to align themselves with the rhythms and processes of nature, to feel a part of their local worlds.

On the other hand, many civilized societies have moved away from a feeling of connectedness with nature, and an understanding of nature’s ways. In the West, we have developed more dualistic ways of thinking, classifying and categorizing everything in the world. Our cities and communities both reflect and influence this thinking. Ours is a world of walls, boxes, and roads, of separation and specialization. Our social institutions are organized by a more mechanistic and linear paradigm, a less organic beat.

As the industrial revolution took hold in communities across the globe we have used this paradigm to organize all areas of our lives. In our educational institutions we have removed children from their families and natural surroundings. We have put them together in rooms and then asked a single adult to provide them with disconnected facsimiles of the world, to divide external reality into separate fields such as art, science, language, and history. What is often ignored in this approach is the way these different phenomena are related, how things often flow together and influence one another.

In a field like science the natural world has been further divided into pieces. When we were young we studied biology, chemistry, physics, and geology– as if each field existed separately from the others. We never received a coherent picture of the world that reflected the way nature actually organizes things, how these phenomena are related to one another and play a role in each individual’s life.

Lacking a unified understanding of nature, our scientists and educators have often used very misleading metaphorical language in order to describe the world. Over the last few hundred years, leading Western scientists have talked about nature as if she were a woman to be dominated, a mindless machine, a struggle for survival, or (at best) a “glorious accident.” These metaphors have influenced the way modern nations have dealt with internal social problems, other communities, and the natural world.

Our beliefs and metaphors for reality are conceptual tools. They help us create images and representations in our mind that we hope will reflect the way the world is actually organized. While these metaphors help to focus our attention on certain things they can also screen out and ignore a lot of information that is important. Over time our thinking has become increasingly rigid and reductionistic, frequently separating phenomena into fixed categories such as “us and them,” or “smart and dumb.”

In the United States, social or physical problems have often been viewed as adversaries people must struggle with or declare war upon. This dualistic thinking underlies the approaches we’ve taken toward poverty, drug abuse, cancer, and crime. It has sent missles firing into Viet Nam, Lebanon, Panama, Libya, Afghanistan, Pakistan and Iraq. In most cases our wars have been ineffective, created new problems, or simply ignored the resulting violence and suffering caused.

Yet, while this hard-edged thinking may be out of touch with the organic complexities of natural phenomena, it has provided the key to the development of sophisticated tools, mathematics, and machines. New inventions (like the microscope, the camera, the steam engine and the computer) pushed change and shaped the unfolding patterns of mechanistic civilizations. They also allowed scientists to observe the rhythmic functioning of atoms, organs, and cells; to glimpse the history of our planets and the stars.

It is in this careful and methodical examination of the natural world that modern systems theory developed. Today we have detailed information about almost everything in the observable universe. We also have a large body of words, concepts and theories that describe how all these things fit together, how these systems provide evidence of certain recurring processes and patterns in the natural world. Setting out initially to classify and categorize nature, science has now brought us full circle, rediscovering Nature’s Paradigm.