The Rise of the Cultural Creatives

Posted on November 3, 2015 by Christopher Chase

The following was written in 1997. It’s been almost 20 years since the idea of Cultural Creatives was introduced. With the rise of Internet social networks, Facebook, youtube and blogs are we now witnessing the dawning influence of this group, in the creation of a new world vision, and shifting of cultural paradigms?

A NEW PHENOMENON is emerging in American culture, according to the results of a recent social research survey. We are at a watershed in history, when the country is shifting away from the modern technocratic society toward what sociologist Paul H. Ray calls “Integral Culture,” concerned with spiritual transformation, ecological sustainability, and the worth of the feminine.

For those who espouse these values, Ray’s findings are likely to be very comforting. The standard bearers of Integral Culture, who Ray calls “Cultural Creatives,” now number 44 million. That’s one quarter of the United States population. At this moment in history, he say, “The potential for launching a cultural revitalization movement is dazzling.”

Still, Ray warns, there is no guarantee the current momentum will continue into the next century, or that Integral Culture will become the dominant force. It is largely up to those who identify themselves as Cultural Creatives to create the new story. What follows are highlights of Ray’s findings, from The Integral Culture Survey: A Study of the Emergence of Transformational Values in America.

America is experiencing a renaissance of values, the author argues. He calls it Integral Culture, composed of the spirituality and ecologically aware. Is this the future? And are you a standard bearer? Are you a Cultural Creative?

Here are the core values, commitments, and beliefs of the Cultural Creatives:

Ending Violence in Society: Concerns about violence and abuse of women and children / 87%

Xenophilism: Love of travel to foreign places, of foreigners, and the exotic / 85%

Ecological Sustainability: Concern for global environment, species extinction, and overpopulation; and willingness to pay to fix it / 83%

Distrust of Big Business: Business has too much power/wealth, is irresponsible, is too profit oriented / 76%

Concern for Relationships: Creating/maintaining them, all kinds: friends, family / 76%

Alternative Health Care: Use of alternative health care in past year / 52%

VALUES OF THE CULTURAL CREATIVES: The distinctive values, commitments, and beliefs of the Cultural Creatives – the most conspicuous representatives of the emerging Integral Culture – may be summarized as follows:

ECOLOGICAL SUSTAINABILITY, BEYOND ENVIRONMENTALISM: Any aspect of ecology and sustainability you can name, Cultural Creatives are emphatically for it – and we are leading the way. They demonstrate awareness of a large range of issues, and their values include wanting to rebuild neighborhoods and communities, achieving ecological sustainability, supporting limits to growth, seeing nature as sacred, wanting voluntary simplicity, and being willing to pay for cleaning up the environment and stopping global warming.

GLOBALISM: Among the top values of Cultural Creatives are xenophilism (love of foreigners, the exotic, and travel to foreign places), and ecological sustainability, which includes concern for planetary stewardship and global ecology, and concern for population problems.

FEMINISM, WOMEN’S ISSUES, RELATIONSHIPS, FAMILY: The fact that women make up 60 percent of the Cultural Creatives is a key to understanding this subculture. Much of the focus on women’s issues in politics comes from them, including concerns about violence and abuse of women and children, the desire to rebuild neighborhoods and communities, the desire to create caring relationships, and concerns about family.

ALTRUISM, SELF-ACTUALIZATION, ALTERNATIVE HEALTH CARE, SPIRITUALITY, AND SPIRITUAL PSYCHOLOGY: Cultural Creatives hold a complex of highly correlated beliefs and values centered on the inner life. This represents a new sense of the sacred that sees a unity between personal growth psychology, the spiritual, and service to others. It also includes a stronger trend toward holistic health and alternative health care.

WELL-DEVELOPED SOCIAL CONSCIENCE AND SOCIAL OPTIMISM: Contrary to what some social critics have argues, an emphasis on the personal does not exclude a social conscience or political concern. Cultural Creatives are as engaged in the world as they are in personal and spiritual issues. Rebuilding and healing society are related to healing oneself, physically and spiritually. With that goes a guarded social optimism. 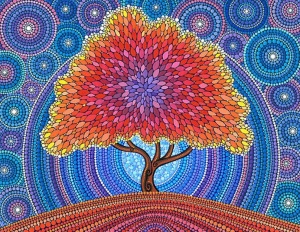 * Yūgen (幽玄) – Deep Awareness of the Universe *  Life in the Age of Shifting Paradigms * Systems Thinking – Seeing How Everything is Connected * “You Are the Big Bang” – Alan Watts * The Global Butterfly Effect * Moving in Synch with the Universe * Earth as Sacred Community – Thomas Berry * The Way of Zen – Wisdom, Compassion & Mindfulness * Paradigms are Made for Shifting * The Universe is One Harmonious Whole  *  How We Participate in the Creative Life of the Universe * Shifting Paradigms: Aligning with the Wisdom of Nature * Surrendering to the Paradigm of Love *

Co-creator and Admin of the Facebook pages "Tao & Zen" "Art of Learning" & "Creative Systems Thinking." Majored in Studio Art at SUNY, Oneonta. Graduated in 1993 from the Child & Adolescent Development program at Stanford University's School of Education. Since 1994, have been teaching at Seinan Gakuin University, in Fukuoka, Japan.
View all posts by Christopher Chase →
This entry was posted in Creative Systems Thinking, cultural creatives and tagged compassion, connectedness, creative systems thinking, creativity. Bookmark the permalink.

5 Responses to The Rise of the Cultural Creatives