The Art of Machiavellian Education Reform

Posted on September 19, 2015 by Christopher Chase

“Machiavellianism is “the employment of cunning and duplicity in statecraft or in general conduct”. The word comes from the Italian Renaissance diplomat and writer Niccolò Machiavelli, who wrote Il Principe (The Prince), among other works.” ~ Wikipedia 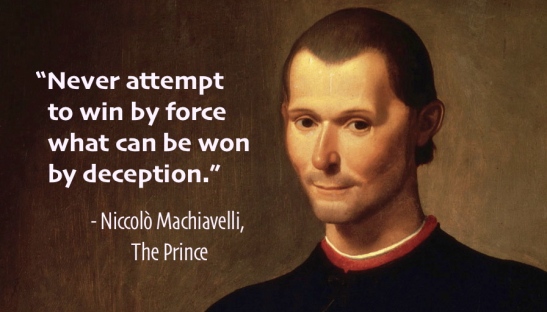 What so called “education reformers” have done in the United States is so Machiavellian its hard to believe, and so many people don’t. As the Italian author of the Prince put it himself, “Never attempt to win by force what can be won by deception.”

A quick recap of Fraud at the Heart of Current Education Reform:

First, former president George Bush put in place NCLB laws, so that the number of charter schools grew in the U.S. and high-stakes testing expanded.

When Barack Obama ran for president he promised to change things, but was secretly used as a “cover” by DFER (Democrats for Education Reform), Bill Gates, Eli Broad, the Walton Family and their charter school Wall Street investor friends.

With financing from Bill Gates (and billions acquired from The American Recovery & Reinvestment Act) charter school “affiliated” agents at the Dept of Education were able to “leverage” change by creating the Race to the Top competition, doling out money to gain support, “require” governors to comply (quite possibly in violation of Federal law), and have the Common Core testing standards implemented for most schools in the nation.

The Ed Dept. built “power” alliances with governors and urban city mayors and (by “requiring” governors to implement teacher accountability strategies based on junk science data and statistics) were able to steal power from, bypass and put fear into the hearts of America’s public school teachers. (Just the kinds of strategies recommended by Machiavelli: reward your friends, scare your enemies).

Once Common Core & RttT were put into place high-stakes testing got worse, the curriculum around the nation more rigid, stressful and confusing for students and teachers.

Machivellian wannabe governors (like Cuomo, Bush & Christie) and urban mayors (like Bloomberg in NY & Rahm Emanuel in Chicago) were able to use low tests scores as an excuse to close “failing” public schools and increase the pipeline of taxpayer funding to newly opened private charter schools.

All the while, a witch hunt “blame the teachers” strategy, began by President Bush (and the Walton Family with their “Waiting for Superman” propaganda film) was kept alive by President Obama’s Dept of Ed leaders.

More public schools were shut down in urban communities, new charters were opened, more money flowing to investors (as was the stated purpose of DFER & New Schools Venture Fund). State and urban taxpayer money in Pennsylvania, Albany, Florida and other places started to bleed out into various privatizing schemes.

Kids and teachers across the nation reported feeling fearful, confused, anxious and depressed. Some parents, teachers and students spoke out. In Atlanta, teachers cheated on the tests and were arrested. A principal accused of doing the same in New York city jumped in front of a moving train.

Teachers quit, creating shortages which fortunately was part of the plan for those influencing actions at the Dept of Education. More charters were opened, inexpensive Teach For America youth with little training and no experience were sent into schools to teach. Teacher job satisfaction and morale across the nation plummeted.

With all the increased testing, in many schools students are being put in front of computers for longer periods of time, just the opposite of what President Obama had promised in his speech to NEA teachers before his election, in 2008. As more money was spent on testing and computers that should have been used to helping impoverished schools flowed to investors and testing industries such as Pearson, Inc.

In response the Opt Out movement rises up. A finger is of blame is pointed at Common Core, so in many places it seems to have been retired from the battle. Though in most cases its just been sent to the shop to be re-painted and rolled out again, re-branded. The testing continues, the charter school profiteering continues.

This month, Race to the Top “architect” Joanne Weiss brags about her magnificent well-crafted Machiavellian strategy in The Stanford Innovation Review. Bill Gates buys primetime media slots on several large TV stations simultaneously, grabbing Sept. 11th airtime to brag about his newest Think It Up ideas for education… (which are actually quite good, since they are aligned with the research on successful learner-centered teaching approaches that had been ignored up to now).

But rather than funding these innovative ideas, with all his billions, Gates and his corporate friends, backed by Wall Street financial institutions that had crashed the economy in 2008, are asking America’s middle class and working poor to send in their money to fund it…

About the only thing more unbelievable than what they’ve done, is they are still getting away with it…

About myself: I’m a Stanford School of Education graduate who worked with real education reform in the 1990s, the Accelerated Schools Project started by former Stanford Prof. Hank Levin. I currently teach English Language Studies at Seinan Gakuin University,  in Japan.

Co-creator and Admin of the Facebook pages "Tao & Zen" "Art of Learning" & "Creative Systems Thinking." Majored in Studio Art at SUNY, Oneonta. Graduated in 1993 from the Child & Adolescent Development program at Stanford University's School of Education. Since 1994, have been teaching at Seinan Gakuin University, in Fukuoka, Japan.
View all posts by Christopher Chase →
This entry was posted in Uncategorized. Bookmark the permalink.

1 Response to The Art of Machiavellian Education Reform