‘Zionism Has Nothing to do With Judaism’ – Holocaust Survivor Dr. Hajo Meyer 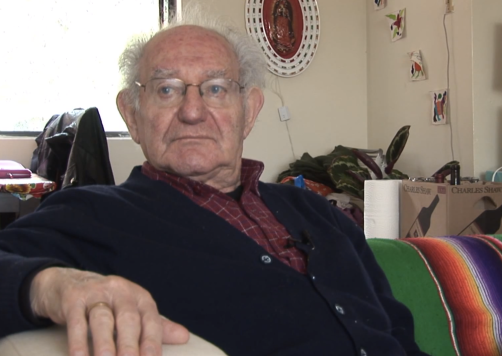 “My name is Hajo Meyer, I was born in August 1924 in Beilefeld, western Germany. And so I am 86 years old. And I had to leave Germany in January 1939 because from November 1938 on I was not allowed to go to school anymore. When in the Netherlands I made my entrance examination to the university still under the German occupation. They allowed that for Jews to be done. Even the German occupation allowed it, under a special setting of Jewish state examination. It occurred in April ’43. Then I went underground and about a year later I was caught and brought to Auschwitz and survived 10 months in Auschwitz.

I was educated in the tradition of enlightened Reform Judaism, without any relation to the prescripts of Halacha [Jewish religious law] but just to the socio-cultural heritage and the enlightened parts of Judaism…

[In my view] this ethical tradition is absolutely contrary to everything which is at the basis of Zionism. Because Zionism was created… at the end of the 19th Century, and in that era it was commonplace to be colonialist, to be racist, to be super-nationalist, to adore the nation-state–so the idea of France for the French, Germany for the Germanics, and then some state for the Jews. This all formed the basis for Zionism.

Zionism and Judaism are contrary to each other. Because Judaism is universal and humane, and Zionism is exactly the opposite. It is very narrow, very nationalistic, racist, colonialist, and all this. There is no “National Judaism.” There is Zionism and there is Judaism, and they are completely different.

[Zionism] has nothing to do with Judaism. Because Judaism, as I learned it– the Reform Movement–  is highly, highly ethical. And so, you cannot connect Zionism with “highly ethical.” Inter-human ethics is a product of evolution. So we have a center in our brain that gives us the feeling of empathy so if we see someone suffer we get the impulse, “Can I help you?”

This fact has been documented by at least–I know two impressive documents. One is by Shulamit Aloni who was once Minister of Education in Israel [explaining] how hateful, how racist, how depreciating the school books in Israel talk about the Palestinians. And Nurit Peled-Elhanan, who is a pedagogue in the University of Tel Aviv, has made a big study of the school books and she’s appalled by the racism which is taught to children in Israel.

And then you get, nowadays, the rabbis– especially the Army rabbis– get evermore aggressive and tell the soldiers it’s a mitzvah, so it’s your duty to kill every Palestinian you see… They are so aggressive. They are so racist. And look, it’s so–I am appalled, I am deeply appalled how hateful, how dehumanized [they are] that they do not see any human aspect in any Palestinian anymore. It’s terrible.

[For a long time] I still believed more or less the propaganda lies from the Israeli side. I mean, the real eye-opener, how it happened for me– I’m afraid it was quite late– especially about the ’48 war, was Ilan Pappé’s work, The Ethnic Cleansing of Palestine.

Before that– Look, they have such a strong propaganda machine that it takes you a hell of a lot of study and knowledge and travel to the Occupied Palestinian Territories in order to see what the reality is. So it took me quite awhile. I mean I started to get critical with Begin and Sharon, and Sabra and Shatila, etc. and then my eyes started to open. So it took me quite awhile.

The Zionists have not any right whatsoever to use the Holocaust for any purpose because they consider people like me–they talked about us as “useless human material.” So, first of all I’m not useless. And secondly, I am human, but I am not material. So I feel deeply, deeply–I could feel if I did not despise these people who use such words so much, I could feel offended…

And like Netanyahu did the other day in the General Assembly of the United Nations, he used the number on my arm– or the number on our arms– to defend a coming attack on Iran. They have nothing to do with each other…

[Zionists] have given up everything that has to do with humanity, with empathy, for one thing: the state. The “blood and soil,” just like the Nazis. I learned in school about blood and soil, and that’s exactly their idea, too.

The journalist who reports from Berlin for the Jerusalem Post, I think it’s Mr. [Weinthal], he has a spotlight on me. So I have the honor of being quoted as an anti-Semite or whatever in the Jerusalem Post, and I cannot get higher honors than to be one of the people like Jimmy Carter, or Noam Chomsky, or Norman Finkelstein, and former [Dutch] Prime Minister Dries van Agt. So I’m very proud to be an anti-Semite.

Co-creator and Admin of the Facebook pages "Tao & Zen" "Art of Learning" & "Creative Systems Thinking." Majored in Studio Art at SUNY, Oneonta. Graduated in 1993 from the Child & Adolescent Development program at Stanford University's School of Education. Since 1994, have been teaching at Seinan Gakuin University, in Fukuoka, Japan.
View all posts by Christopher Chase →
This entry was posted in Uncategorized and tagged connectedness, dualistic thinking, psychology, spirituality, systems thinking, wisdom, world peace. Bookmark the permalink.

7 Responses to ‘Zionism Has Nothing to do With Judaism’ – Holocaust Survivor Dr. Hajo Meyer