Why Opting Out from PARCC is Important 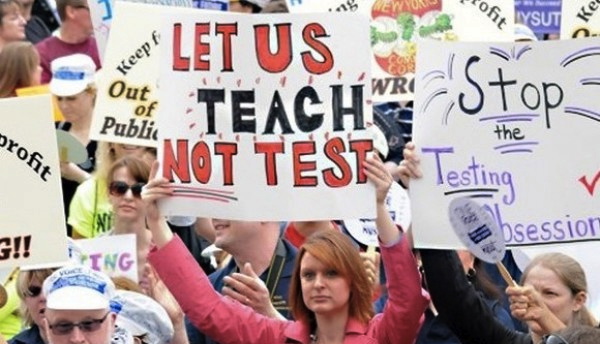 This week a number of mainstream media outlets (such as PBS News Hour) reported on students across the United States who are Opting Out of PARCC exam testing. They are supported by their parents, refusing to take these tests aligned with the Common Core standards. Many administrators are concerned about these acts of grassroots dissent by children. In a recent letter to parents in Illinois, State Superintendent of Education Christopher Koch emphasized the importance of having one’s child participate in the exam:

“This test represents a significant shift, and the culmination of five years of statewide work, beginning with the adoption of the new Illinois Learning Standards in English language arts and mathematics in 2010. This is not the test we took in school. It’s not even similar to the test Illinois students took last year. It is more engaging, interactive and meaningful and will better prepare students for life and careers in the 21st century.”

What Superintendent Koch did not mention is that large numbers of professional educators, researchers and parents have good reason to believe that these tests will not better prepare students for the 21st Century. Quite the opposite, we believe this is an attempt to introduce a high-stakes testing framework that could transform American public education in potentially destructive and un-democratic ways.

I’m a University teacher who was involved with U.S. education reform from 1988 to 1992.  Since 1993, I have lived and taught in Japan, where high-stakes testing has dominated the educational system for over 60 years. I am very concerned that while there may be good elements to Common Core, the linking of these standards to high-stakes testing, closings of public schools and punitive teacher assessments is a very bad idea.

I have described some of these problems here (View from Japan: Common Core is a Disaster in the Making). In 2013, Anthony Cody presented an excellent analysis of critical flaws with Common Core (Common Core Standards: 10 Colossal Errors). Former U.S. Secretary of Education Diane Ravitch has been sharing educator’s concerns about No Child Left Behind and Common Core in television interviews and on her blog, as has reporter Valerie Strauss at the Washington Post, in her Answer Sheet columns.

Unfortunately, rather than seeking the input of America’s educators, the people behind Common Core have ignored our concerns and tried to avoid having a dialogue. Instead, they are rolling along at full steam, trying to set the new standards in stone, by forcing changes in curriculum and giving students new high-stakes tests aligned with the Core.

From our point of view, these tests (which have never been “tested”) are based on questionable standards, ignore decades of actual research evidence on how children learn and bypass successful learner-centered innovations in the field of education. Indefensible, from the point of view of many parents and educators, is that the concerns of more than 500 Early Childhood Health and Education Professionals have been totally ignored. The Core’s promoters call their standards and testing methods “scientific,” yet ignore that science is a collaborative process, involving peer reviews, careful research and small-scale experimentation before moving to large-scale implementation.

The sense many Americans have, both at home and overseas, is that we are witnessing an attempted hijacking of our nation’s public education system by people with questionable motives. My main concern, as an educator who was involved in successful U.S. school reform in the past and has been living in Japan, is that once the new testing systems and standards are in place there will be many negative consequences, and (most importantly) that it will be VERY difficult to remove the changes in testing and instruction which are now being forced into place.

In Asia, they have long experience with a culture of high-stakes exams, teaching to the test and test prep, especially at the junior high and high school level. On paper and in International rankings, this seems to be effective, as Asia’s students do very well in testing situations. But in practice it means there is much less creativity, experimentation, freedom of expression and diversity in education.

There also appear to be links between the testing culture and high rates of suicide and bullying in schools (see this NY Times article on South Korea). On average, Asia’s students work hard in order to do well on highly competitive and rigorous exams, but at what cost? Teachers need to be accountable, but we also need to hold business and government leaders tinkering with education accountable for new policies that focus on data collection, but are not aligned with research evidence.

This is why the grassroots Opt Out protests and other criticisms of Common Core are very important now. Opting Out is a way for parents and students to voice their disagreement and concerns in a democratic and peaceful way. From the U.S. revolution to the abolitionists, from the suffragettes to the civil rights movements, speaking out against unjust and unwise government policies is part of what being American is all about.

Once the Common Core standards and tests are in place it will be much harder to make changes. As state governments plough forward the Opt Out protests are throwing a monkey wrench into the Core’s machinery, helping to push the issue into the mainstream media and the consciousness of the nation. We need this to happen, so Americans can debate and reflect upon the wisdom of this potentially dangerous path the country is embarking upon.

I’ve seen the impact of high-stakes testing in Japan, where many parents, teachers and students experience the problems high-stakes testing creates. I’ve also seen that once a testing system like this is set in place it can become oppressive (see CNN news report on China), and take on a life of its own.

“What is education for? Is it for pouring facts and formulas into students’ heads, or is it for creating learners? Research shows that an environment that emphasizes evaluation and testing creates a fixed [achievement] mindset. That is, it sends the message that intellectual abilities are fixed and that the purpose of school is to measure them. Students come to see school as the place to look smart and, above all, not look dumb— not a place to create and learn.” ~Carol Dweck, Ph.D.

Co-creator and Admin of the Facebook pages "Tao & Zen" "Art of Learning" & "Creative Systems Thinking." Majored in Studio Art at SUNY, Oneonta. Graduated in 1993 from the Child & Adolescent Development program at Stanford University's School of Education. Since 1994, have been teaching at Seinan Gakuin University, in Fukuoka, Japan.
View all posts by Christopher Chase →
This entry was posted in education reform and tagged accelerated schools project, education reform, learner-centered education. Bookmark the permalink.

3 Responses to Why Opting Out from PARCC is Important