Alan Watts ☮ The Way of Waking Up

Posted on February 12, 2015 by Christopher Chase

The following is the transcript for the youtube video The Way of Waking Up, narrated by Alan Watts….

“So then, here’s the drama. My metaphysics, let me be perfectly frank with you, is that there is the central Self, you can call it God, you can call it anything you like, and it’s All of Us. It’s playing all the parts of All Beings whatsoever everywhere and anywhere.

And it’s playing the game of hide and seek with itself. It gets lost, it gets involved in the farthest-out adventures, but in the end it always wakes up and comes back to itself. And when you’re ready to wake up, you’re going to wake up, and if you’re not ready you’re going to stay pretending that you’re just a ‘poor little me.’ 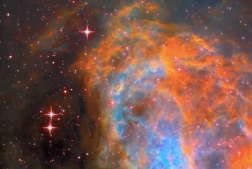 So then, when you’re in the way of waking up, and finding out who you are, you meet a character called a guru, as the Hindus say ‘the teacher,’ ‘the awakener.’ And what is the function of a guru? He’s the man that looks you in the eye and says ‘Oh come off it. I know who you are.’

You come to the guru and say ‘Sir, I have a problem. I’m unhappy, and I want to get one up on the universe. I want to become enlightened. I want spiritual wisdom.’ The guru looks at you and says ‘Who are you?’

You know Sri-Ramana-Maharshi, that great Hindu sage of modern times? People used to come to him and say ‘Master, who was I in my last incarnation?’ As if that mattered. And he would say ‘Who is asking the question?’

And he’d look at you and say, get right down to it, ‘You’re looking at me, you’re looking out, and you’re unaware of what’s behind your eyes. Go back in and find out who you are, where the question comes from, why you ask.‘ 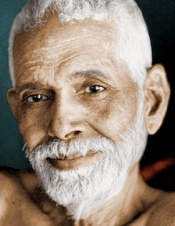 And if you’ve looked at a photograph of that man–I have a gorgeous photograph of him; I look by it every time I go out the front door. And I look at those eyes, and the humor in them; the lilting laugh that says ‘Oh come off it. Shiva, I recognize you. When you come to my door and say `I’m so-and-so,’ I say `Ha-ha, what a funny way God has come on today.”

So eventually–there are all sorts of tricks of course that gurus play. They say ‘Well, we’re going to put you through the mill.’ And the reason they do that is simply that you won’t wake up until you feel you’ve paid a price for it.

In other words, the sense of guilt that one has. Or the sense of anxiety. It’s simply the way one experiences keeping the game of disguise going on. Do you see that? Supposing you say ‘I feel guilty.’ Christianity makes you feel guilty for existing. That somehow the very fact that you exist is an affront. You are a fallen human being.

I remember as a child when we went to the service of the church on Good Friday. They gave us each a colored postcard with Jesus crucified on it, and it said underneath ‘This I have done for thee. What doest thou for me?’ You felt awful. YOU had nailed that man to the cross.

Because you eat steak, you have crucified Christ. Mythra. It’s the same mystery. And what are you going to do about that? ‘This I have done for thee, what doest thou for me?’ You feel awful that you exist at all.

But that sense of guilt is the veil across the sanctuary. ‘Don’t you DARE come in!’ In all mysteries, when you are going to be initiated, there’s somebody saying ‘Ah-ah-ah, don’t you come in. You’ve got to fulfill this requirement and that requirement, THEN we’ll let you in.’

So I invent for myself an elaborate system of delaying my waking up. I put myself through this test and that test, and when I convince myself it’s sufficiently arduous, THEN I at last admit to myself who I really am, and draw aside the veil and realize that after all, when all is said and done, I am that I am, which is the name of God.’

Co-creator and Admin of the Facebook pages "Tao & Zen" "Art of Learning" & "Creative Systems Thinking." Majored in Studio Art at SUNY, Oneonta. Graduated in 1993 from the Child & Adolescent Development program at Stanford University's School of Education. Since 1994, have been teaching at Seinan Gakuin University, in Fukuoka, Japan.
View all posts by Christopher Chase →
This entry was posted in Alan Watts and tagged Alan Watts, creative by nature, creative universe, wisdom. Bookmark the permalink.

3 Responses to Alan Watts ☮ The Way of Waking Up