Posted on January 24, 2015 by Christopher Chase

“We shall require a substantially new manner of thinking if mankind is to survive.”  ~Albert Einstein

“Empathy is really important, and I think only when our clever brain and our human heart work together in harmony can we achieve our full potential.” ~Jane Goodall

What do the Dalai Lama, Mikhail Gorbechev, Malala Yousafzai, Martin Luther King Jr., Albert Einstein, Desmond Tutu, Lech Walesa & Jane Goodall have in common? I believe they each exemplify how wise and compassionate people can inspire others to come together to change the world in peaceful and positive ways.

Here below are 20 videos with short interviews and speeches from the people mentioned above, and others. While many world leaders focus on maintaining or expanding power, these compassionate thinkers have demonstrated how wisdom can be applied creatively and effectively, providing peaceful solutions to the complex problems that exist in our world.

The Dalai Lama – “The Whole World is One”

David Suzuki – Human Beings are a Force of Nature

Alan Watts – You are the Universe

May El-Khalil describes how a marathon brought peace to Lebanon

Zak Ebriham, son of a terrorist, shares why he chose peace

Richard Feynman describes how science sees the beauty of a flower 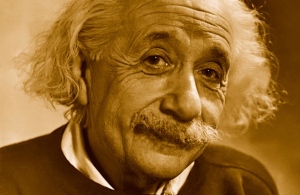 “As man becomes conscious of the stupendous laws that govern the universe in perfect harmony, he begins to realize how small he is. He sees the pettiness of human existence, with its ambitions and intrigues, its ‘I am better than thou’ creed. This is the beginning of cosmic religion within him; fellowship and human service become his moral code. Without such moral foundations, we are hopelessly doomed. If we want to improve the world we cannot do it with scientific knowledge but with ideals. Confucius, Buddha, Jesus and Gandhi have done more for humanity than science has done. We must begin with the heart of man—with his conscience—and the values of conscience can only be manifested by selfless service to mankind.”

20 Responses to The Way of Wisdom – Great Minds Think Compassionately