Risks & Consequences in the Age of Organized Irresponsibility

Posted on January 4, 2015 by Christopher Chase

“We are living in an age where the decision making is the primary background for catastrophes. I think it’s very important to realize this because modernity produces more and more uncontrollable consequences. We have a system of organized irresponsibility: Nobody really is responsible for those consequences… and this system has to be changed.” 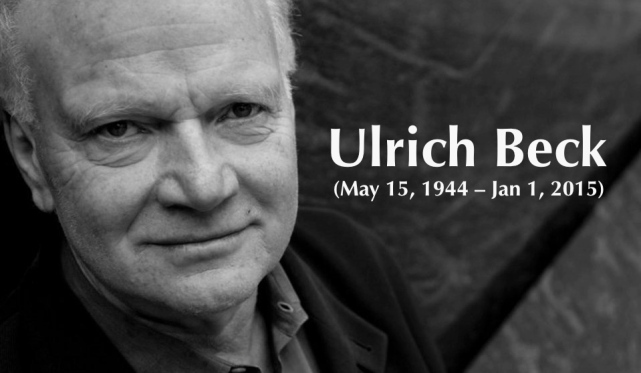 Ulrich Beck (May 15, 1944 – January 1, 2015) was a German sociologist. Here below are excerpts from interviews where he discussed the Fukushima and September 11th disasters. Beck’s thesis is that we are living in an age of catastrophe and high risk because those in positions of power and influence- be they governments, businesses, organized criminals or global terrorist networks- benefit from instability, volatility and irresponsibility.  Beck emphasized that we need to evolve more democratic ways of thinking, speaking and responding to this, because until we do we’ll be unable to stabilize a world where certain organizations and individuals profit from instability. A related concept is the Shock Doctrine put forth by Naomi Klein.

“The 11th of September stands for the complete collapse of language. Ever since that moment,  we’ve been living, thinking and acting using concepts that are incapable of grasping [these] events. The terrorist attack was not a war, not a crime, and not even terrorism in the familiar sense.

No one has yet offered a satisfying answer to the simple question of what really happened. An explosion of silence has followed the implosion of the Twin Towers. If we don’t have the right concepts it might seem that silence is appropriate. But it isn’t.

Because silence won’t stop the self-fulfilling prophecies of false ideas and concepts, for example war. This is my thesis: the collapse of language that occurred on the 11th of September expresses our fundamental situation in the 21st century, of living in what I call a “World Risk Society.”

I don’t think people are ignoring the danger; politicians are using them for their purpose. Ecological and financial conflicts fit the model of modernity’s self-endangerment. They both clearly result from the accumulation and distribution of “bads” that were tied up with the production of “goods.” They result from society’s central decisions, but as unintentional side effects of those decisions.

Much of the literature on risk in economics treats risk as a positive element within investment decisions and risk-taking, as a dynamic aspect linked to the essence of markets. But investing in the face of risk presupposes trust. Trust, in turn… implies committing to a person, group or institution over time.

This prerequisite of active trust, in the field of economics as well as in everyday life and democracy, is dissolving. The perception of terrorist threats replaces active trust with active mistrust. It therefore undermines the trust in fellow citizens, foreigners and governments all over the world…” [Source: The Risk Society]

We’re not only related to it in nuclear energy, but also, [with] climate change, global financial risks, problems of terrorism and many other cases. More and more, we are confronted with these kinds of risks. Fukushima is a very symbolic case of the risks of modern times.

Risks depend on decision making. We are living in an age where the decision making is the primary background for these kinds of catastrophes. I think it’s very important to realize this because modernity, or even what you could say is the victory of modernity, produces more and more uncontrollable consequences.

We have a system of organized irresponsibility: Nobody really is responsible for those consequences… and this system has to be changed.

From a sociological point of view, at least in Europe but in many other countries as well, in the 19th century, we developed a system of rules in order to cope with the uncertainties and risks produced by modernity. It includes the exchange of money against loss of an eye, or loss of an arm, or loss of the whole body or loss of the whole city. The relationship between risk and insurance was actually a system of norms, or you could even say a social contract of progress.

But if you run atomic industries, you don’t have to have insurance. It’s a mixture of private and state insurance. But actually, all the amount of money, which is prepared to react to this situation, is much less than what is needed. So actually, it is beyond insurance.

We are still thinking in terms of the 19th century. But there’s a historical mistake in thinking in those terms. Let me give you an example to explain it to you.

In some village in Bavaria, there were some factories, chemical factories. And smoke came out of the chimneys of many factories and destroyed the village. You could even see it; it was a very simple. It seemed to be a very simple case. And of course the farmers and the villagers went to court and tried to get compensation.

And then the judge said: “Well, I can see your case. But the problem is I have to prove that there’s only one person who is responsible for it. And since there are many factories, I couldn’t name one person.”

So there was no compensation.

Let me give you another example. How many people died from Chernobyl? There are (estimates) from 40 persons or 50 persons to more than a million. And why is this happening? Because statistics and causal norms are not prepared for these kinds of long-term consequences.

I’m talking about a principle, which is actually the basis of capitalism. Atomic energy and atomic industries are, let’s say, socialist industries because the state, the population, the citizens are paying if something goes wrong.

And actually, this is a contradiction to capitalism and the market economy. We have the same discussion actually in relation to the banking system; it’s quite similar. Actually, the banks should take care of possible crises, and maybe they should have an insurance principle as well. But they don’t, so the state has to take it. This is socialism; this is state socialism.

In Germany, we have a very strong civil society and civil society groups and movements in relation to the environment. Actually, the Green Party was invented as a consequence of Chernobyl.

I think, in order to make the problems–the consequences of modern technology–visible in the public, you need democracy in the sense of civil society movements. If you don’t have those movements, you have a very strong direct involvement between government and business. There’s no public, there’s no transparency, there’s no public involved.

Actually, (there is) not really democratic decision-making, but (it’s) on the basis of this kind of very strict cooperation (between government and business).

[Source: System of organized irresponsibility behind the Fukushima crisis ]

* Systems Thinking: Seeing How Everything is Connected * How Wisdom Grows – Educating Hearts & Minds  * Rediscovering Nature’s Paradigm * Love vs. Power: A Tale of Two Mindsets * Perpetual Curse of the Warrior Mindset *

Co-creator and Admin of the Facebook pages "Tao & Zen" "Art of Learning" & "Creative Systems Thinking." Majored in Studio Art at SUNY, Oneonta. Graduated in 1993 from the Child & Adolescent Development program at Stanford University's School of Education. Since 1994, have been teaching at Seinan Gakuin University, in Fukuoka, Japan.
View all posts by Christopher Chase →
This entry was posted in Creative Systems Thinking and tagged compartmentalization, creative systems, creative systems thinking, new paradigm, systems thinking. Bookmark the permalink.

1 Response to Risks & Consequences in the Age of Organized Irresponsibility