Christmas 1914 – When Soldiers Made Peace

Posted on December 25, 2014 by Christopher Chase 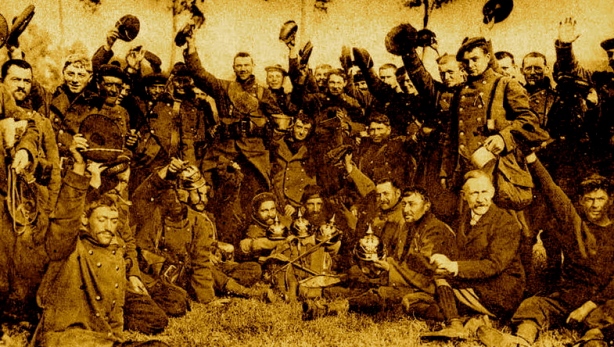 “The Christmas truce (German: Weihnachtsfrieden; French: Trêve de Noël) was a series of widespread but unofficial ceasefires along the Western Front around Christmas 1914. In the week leading up to the holiday, German and British soldiers crossed trenches to exchange seasonal greetings and talk.

In areas, men from both sides ventured into no man’s land on Christmas Eve and Christmas Day to mingle and exchange food and souvenirs. There were joint burial ceremonies and prisoner swaps, while several meetings ended in carol-singing.

Men played games of football with one another, giving one of the most enduring images of the truce. However, the peaceful behaviour was not ubiquitous; fighting continued in some sectors, while in others the sides settled on little more than arrangements to recover bodies.

The following year, a few units arranged ceasefires, but the truces were not nearly as widespread as in 1914; this was, in part, due to strongly worded orders from the high commands of both sides prohibiting fraternisation.

Soldiers were no longer amenable to truce by 1916. The war had become increasingly bitter after devastating human losses suffered during the battles of the Somme and Verdun, and the incorporation of poison gas.

The truces were not unique to the Christmas period, and reflected a growing mood of “live and let live“, where infantry in close proximity would stop overtly aggressive behaviour, and often engage in small-scale fraternisation, engaging in conversation or bartering for cigarettes. 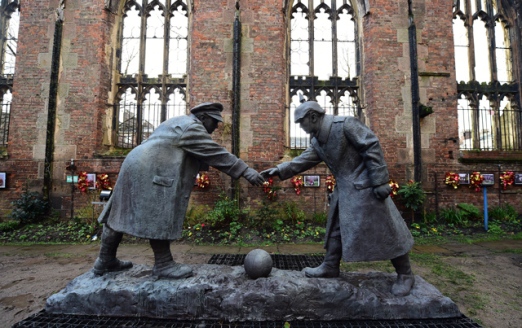 In some sectors, there would be occasional ceasefires to allow soldiers to go between the lines and recover wounded or dead comrades, while in others, there would be a tacit agreement not to shoot while men rested, exercised, or worked in full view of the enemy.

The Christmas truces were particularly significant due to the number of men involved and the level of their participation – even in very peaceful sectors, dozens of men openly congregating in daylight was remarkable – and are often seen as a symbolic moment of peace and humanity amidst one of the most violent events of human history.”

Video: A UEFA tribute to the 100 year Anniversary of the Christmas truce

and, soldiers in Afghanistan remember…

Co-creator and Admin of the Facebook pages "Tao & Zen" "Art of Learning" & "Creative Systems Thinking." Majored in Studio Art at SUNY, Oneonta. Graduated in 1993 from the Child & Adolescent Development program at Stanford University's School of Education. Since 1994, have been teaching at Seinan Gakuin University, in Fukuoka, Japan.
View all posts by Christopher Chase →
This entry was posted in Creative Systems Thinking and tagged creative by nature, paradigm of love, war and peace, wisdom, world peace. Bookmark the permalink.

2 Responses to Christmas 1914 – When Soldiers Made Peace