Posted on December 14, 2014 by Christopher Chase 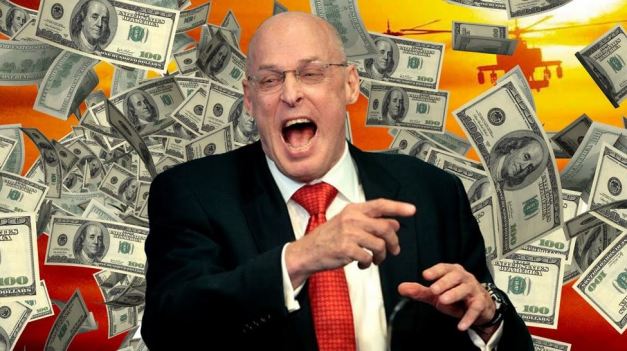 It’s been several years since the Wall Street financial crisis of 2008. Millions of people around the world lost their homes, jobs and life savings during the meltdown. And still, not one Wall Street bank or CEO has been investigated or charged with any crimes.

At the center of it all, there’s some big questions about the suspicious actions of former Goldman Sachs CEO Henry Paulson (pictured above), who left his Wall Street job to work for President Bush at the U.S. Treasury, right before the crash, that have never been properly answered:

The documentary Inside Job does a great job of explaining what happened during the meltdown and alludes to this, but doesn’t answer these three questions definitively. They show how Paulson was part of an organized cabal of very powerful people inside both the U.S. Government and the banking industry, who were well aware of the problems they had created.

In 2008, Dylan Ratigan, the host of CNBC’s MoneyBall made these candid comments about Paulson, mentioning how as chairman of Goldman Sachs he pushed Washington for deregulation and to allow the big banks to leverage their transactions, which meant, as this writer explains “the Wall Street banks were leveraged 30 to 1. Therefore, a 4% loss on their portfolio meant they were bankrupt. They were all bankrupt, and should have been liquidated in bankruptcy.”

If everything Ratigan says above is true that means that as a CEO and insider Paulson knew more about what was going on with Wall Street than anyone else. It would explain why he was motivated to move to Washington to make sure the banks could be bailed out, once the true nature of the subprime crisis became known.

But one wonders how he benefited, given that Paulson would have to sell off all his banking investments in order to take the public service job, to show there was no “conflict of interest.” Well, this was actually a very wise financial move, considering that the value of his investments would plummet once the “shit hit the fan.”

This article (The 200 million dollar reason Paulson became Treasury secretary) explains how Paulson profited greatly by moving when he did. It turns out there was a tax loophole in place for members of the executive branch (the President, his cabinet secretaries) that allows them to pay no capital gains taxes for selling investments before taking office.

“In July 2006, Henry Paulson liquidated 3.23 million shares of Goldman, roughly 1% of the entire company, in a one time public sale. Goldman’s $152 share price left Paulson with a tax free gain of $491 million… Without this loophole, had Henry sold his shares at the exact same price and time, he would have been liable for more than $200 million worth of state and Federal capital gains taxes… Goldman shares peaked in October 2007 at $236. Just thirteen months later, after the collapse of Lehman Brothers and Bear Stearns, Goldman shares slid 77.5% to an all time low of $53.31. Had Henry stayed CEO through that entire roller coaster ride, his 1% stake would be worth just $170 million, roughly $100 million after taxes. And had Paulson stayed at Goldman, it’s very unlikely he would have ever sold any of his shares. It is highly probable that his 1% stake would have grown from $500 million to nearly $800 million before watching it tailspin to $170 million. Depending on how you look at it, Henry Paulson saved anywhere between $200 and $400 million by becoming Secretary of Treasury. Not bad for a government job!”

So, we can now see how moving from Wall Street to Washington was actually a very “lucrative” financial move for Paulson. That brings us to the second question, did he know well in advance that there was a subprime tsunami on the horizon? Besides his selling off of assets and moving to Washington, is there other evidence that Paulson knew before 2006 what was going to happen?

According to investigative reporter Greg Gordon, of McClatchy newspapers:

“At least as early as 2005, Goldman began using [credit default swaps] to limit its exposure to risky mortgages, the first of multiple strategies it would employ to reduce its subprime risk. The company has closely guarded the details of most of its swaps trades, except for $20 billion in widely publicized [insurance] contracts it purchased from AIG in 2005 and 2006 to cover mortgage defaults or ratings downgrades on subprime-related securities it offered offshore.”

In other words, while Paulson was still CEO, Goldman Sachs began to play both sides of the table, selling toxic mortgages, insuring them and also betting against them with the credit default swaps. By the time the 2008 financial meltdown occurred, his bank was in a much stronger position than competitors Bear Stearns and Lehman Brothers.

Moreover, with Paulson able to funnel money to his friends from the U.S. Treasury the financial integrity of both Goldman Sachs and AIG was supported. They were able to clear their books of all the toxic loans they still had, while homeowners, pension funds and others around the world had to take “the hit” of big financial losses.

Sounds a lot like fraud or money laundering, no? That was the conclusion journalist Gordon and others have reached, and yet Paulson and all others involved have yet to be formally charged, investigated or prosecuted.

“In 2006 and 2007, Goldman Sachs Group peddled more than $40 billion in securities backed by at least 200,000 risky home mortgages, but never told the buyers it was secretly betting that a sharp drop in U.S. housing prices would send the value of those securities plummeting.

Goldman’s sales and its clandestine wagers, completed at the brink of the housing market meltdown, enabled the nation’s premier investment bank to pass most of its potential losses to others before a flood of mortgage defaults staggered the U.S. and global economies.

Only later did investors discover that what Goldman had promoted as triple-A rated investments were closer to junk.

Now, pension funds, insurance companies, labor unions and foreign financial institutions that bought those dicey mortgage securities are facing large losses, and a five-month McClatchy investigation has found that Goldman’s failure to disclose that it made secret, exotic bets on an imminent housing crash may have violated securities laws.

“The Securities and Exchange Commission should be very interested in any financial company that secretly decides a financial product is a loser and then goes out and actively markets that product or very similar products to unsuspecting customers without disclosing its true opinion,” said Laurence Kotlikoff, a Boston University economics professor who’s proposed a massive overhaul of the nation’s banks. “This is fraud and should be prosecuted.”

Finally, we have the third question of why there has been no investigation or prosecution of Wall Street banks and players like Henry Paulson? The answer to that was given in 2013, by former U.S. attorney general Eric Holder, during a Judiciary Committee hearing.

At that time Holder described how the size of these banks makes them “too big to fail” and “inhibits” prosecution of top CEOs by the attorney general’s office, the highest legal power in the nation. Put another way, he is explaining how the very size and power of Wall Street financial institutions puts them above the reach of the law.

Co-creator and Admin of the Facebook pages "Tao & Zen" "Art of Learning" & "Creative Systems Thinking." Majored in Studio Art at SUNY, Oneonta. Graduated in 1993 from the Child & Adolescent Development program at Stanford University's School of Education. Since 1994, have been teaching at Seinan Gakuin University, in Fukuoka, Japan.
View all posts by Christopher Chase →
This entry was posted in Creative Systems Thinking and tagged banking, compartmentalization, creative systems thinking, dualistic thinking, finance. Bookmark the permalink.