Perpetual Curse of the Warrior Mindset

Posted on October 14, 2014 by Christopher Chase

“We shall require a substantially new manner of thinking if mankind is to survive.”  ~Albert Einstein 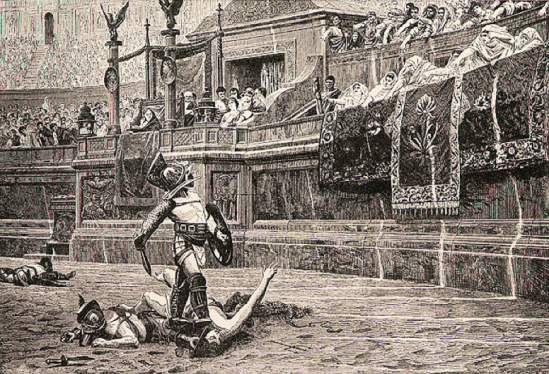 For well over 2000 years a competitive “dog-eat-dog” mindset has dominated the world’s most powerful human civilizations. The goals of our leaders (as well as most members) have been to conquer, defeat or control whatever (and whomever) we can. Those who thought differently were quickly pushed to the side, silenced, enslaved, ignored or demonized.

Look closely at the challenges humanity has been struggling with. What is the root cause of the environmental destruction, the poverty and inequality, crime, racism, terrorism, economic instability, mindless consumerism, endless wars and skyrocketing military spending?

These problems exist (in my opinion) because the most powerful human cultures and civilizations have propagated a world view that presents life as a never-ending war between opposing forces- a struggle between good and evil, man and nature, friend and enemy, “us” vs. “them.” Such dualistic thinking can serve a useful purpose at times, but creates chaos, inequity, unhappiness and instability when allowed to continuously dominate people’s lives.

For thousands of years, those in power have sought to perpetuate mindsets of competition, insecurity, scarcity and fear among the masses, in order to maintain their “ruling” positions. Nationalism, militarism, materialism, sexism, racism, colonialism, slavery, industrialization and consumerism are culturally conditioned ways of thinking and behaving rooted in a competitive and cold hearted view of fellow human beings and the natural world. 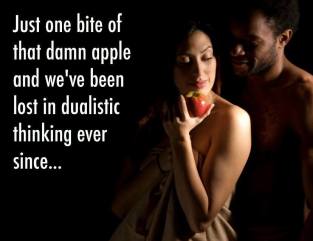 Like Adam & Eve, we continue to feed one another the lie of good vs. evil, rather than sharing the true story of ourselves as sisters and brothers, magical children of the Tree of Life. It’s almost as if the human family has been living under a spell, brain-washed and hypnotized to live in fear, to close our hearts to greater generosity, joy, wisdom, creativity, cooperation, peace and compassion.

Without a doubt, the warrior mindset has served a useful evolutionary purpose on our planet. There have always been situations of scarcity and conflict where brave and unselfish heroism was needed. The problem is that with the rise of hierarchal civilizations (and a corresponding “ruling class”) our loyalty, bravery and willingness to battle “enemies” has been continuously manipulated by those in positions of influence and power.

When small tribes go into battle their chiefs go with them, and are willing to die. Civilizations’s rulers- from ancient Rome to modern Wall Street- keep themselves safe behind guards and high walls, seeing their warriors as pawns, not brothers.

In the current global narrative being spread by Western media and governments we are told that our modern Civilization is locked in a war with blood-thirsty Muslim terrorists. Is this story true? As journalist Nafeez Ahmed has suggested, the narrative of a “Clash of Civilizations” that is being told to the world may actually be intended to feed our fears, and distract us from seeing the bigger picture, that industrialized Civilization is actually in a state of crisis (see video).

When fear-based thinking dominates a society the innate wisdom and compassion of artists, poets, teachers, musicians, women, children, elders and animals is often treated as inferior and unimportant- if it does not support the goals of leaders– be they kings, queens, emperors, dictators, terrorist masterminds or corporate CEOs…

Jesus understood this, as did the Buddha, Lao Tsu, Gandhi, Helen Keller, Albert Einstein, Mother Theresa, the Dalai Lama, John Lennon, Martin Luther King, Jr. and countless others down through the ages. Millions honor and treasure their words, but are we ready yet to become “warriors” of compassion, to put wisdom into action, to open our hearts and question the fearful and aggressive thinking that our “great civilizations” continue to perpetuate?

As Einstein said, in order for our species to survive, we may have to. 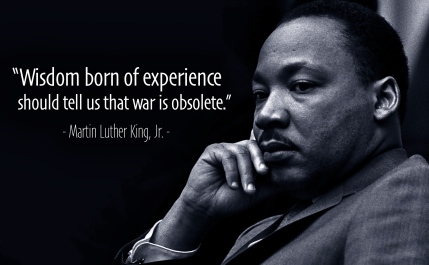 ”When the power of love overcomes the love of power, the world will know peace.”
~ Sri Chinmoy Ghose

The Crisis of Civilization (Documentary of the Big Picture):

83 Responses to Perpetual Curse of the Warrior Mindset