The Illusion of Individuality 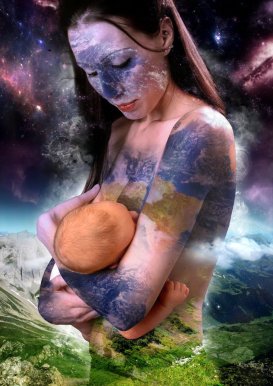 “If you see yourself in the correct way, you are as much extraordinary phenomena of Nature as trees, clouds, the patterns in running water, the flickering of fire, the arrangement of the stars, and the form of a galaxy…” ~Alan Watts

According to the mystics, we are each expressions of the All, of Nature, God, Tao… the Great Mystery. But why is it so hard to see that and feel that way in our day-to-day lives?

“Civilized” society tells us that we are individuals, completely separate from one another. This is especially true in the Western world. We even have cultural practices that help to reinforce this view, such as the idea that a newborn baby should be placed alone in a room, away from parents.

In many non-Western cultures the individual is seen first and foremost as a member of family and community. A newborn child is viewed as an extension of his or her mother’s body.

In most traditional societies the physical closeness of child and mother is maintained for longer periods then in modernized cultures. In their first year babies usually sleep next to their mothers and are carried everywhere, in close contact with their bodies. This all happens before a child can speak, but it probably has some sort of deep psychological impact.

For people from Non-Western cultures the practice of putting a baby alone in a room at night- physically separated from both the mother and father– seems cruel and barbaric. For those of us raised this way it must have been scary- an existential crisis that happened before we could even speak.

Our sense of separation from our “creators” begins early, a reenactment of the Garden of Eden story, perhaps? Thrown out of Paradise, abandoned by Mother Nature & Father Sky…

Thus the joy and sense of return when a more holistic and ecological view of Nature and family becomes complete in our experience. Feeling a deeper sense of unity with the world, we start to realize that we are living extensions of our ancestors, and the children of Nature, as well.

We are fed by our planet’s body, each and every day. Kept alive by the photons from our local star. Sustained from moment to moment by a layer of air that keeps us alive- moment to moment– with every single breath we take.

As we start to wake up, we realize that beyond our parents and ancestors there lies the Universe itself, which sustains each of us. We are living expressions of our solar system, children of the sun that shines down on the forests and fields, providing the energy by which all Life grows and changes.

Like the galaxies, moon, oceans, trees and rivers, we and our ancestors are each a living part of this, an expression of the Creative Dance that surrounds and sustains us.

“Learn how to see, realize that everything connects to everything else.”
~Leonardo Da Vinci~

“People normally cut reality into compartments, and so are unable to see the interdependence of all phenomena. To see one in all and all in one is to break through the great barrier which narrows one’s perception of reality.” ~Thich Nhat Hanh

“The Earth is alive and contains the knowledge you seek. It is your consciousness that determines what it reveals. How to access this knowledge? And where are the keys to open it and make it yours? The Earth speaks. Love her, honor and respect her and she will reveal her secrets.” —Barbara Marciniak

Co-creator and Admin of the Facebook pages "Tao & Zen" "Art of Learning" & "Creative Systems Thinking." Majored in Studio Art at SUNY, Oneonta. Graduated in 1993 from the Child & Adolescent Development program at Stanford University's School of Education. Since 1994, have been teaching at Seinan Gakuin University, in Fukuoka, Japan.
View all posts by Christopher Chase →
This entry was posted in Creative Systems Thinking and tagged connectedness, creative by nature, dualistic thinking, interdependence, paradigm of love, wisdom. Bookmark the permalink.

3 Responses to The Illusion of Individuality