Posted on April 6, 2014 by Christopher Chase

“What we have been living for three decades is frontier capitalism, with the frontier constantly shifting location from crisis to crisis, moving on as soon as the law catches up. ” ― Naomi Klein, Shock Doctrine 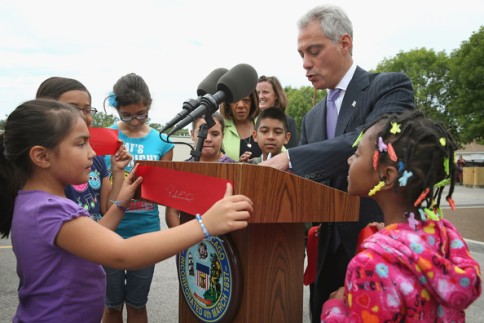 Last Spring, when the Chicago closings were in the news, I noticed a news interview with a parent and council member from Delano elementary school, who said, “They want to take our community. They’ve been wanting Delano for years. Look where you’re at. You’re five minutes from downtown. You’re in the park. It’s just a beautiful area, very beautiful.”

Then last month, watching the new Chicagoland series on CNN, a map was shown of the 50+ schools scheduled to be closed. It seemed kind of suspicious to me that the locations are all clustered together. If you take time to watch the CNN series it soon becomes clear how these school closings are creating chaos and fear for residents. We see scenes of young children crying, afraid because they will have to walk through high crime areas (the green on the map below) to schools outside their neighborhoods, where rival gangs dominate and control the streets. 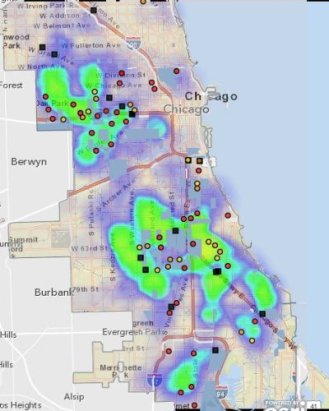 This has made me wonder if the actual goal of Chicago’s leaders might be to implement what Naomi Klein has called the “shock doctrine,” encouraging minority residents to flee their neighborhoods, so that their land can be bought up cheaply and “redeveloped.”

Mayor Emanuel has cited a lack of funding and falling student enrollment in poor areas as the reason for the closings. Yet what he fails to mention is that since 2000, Chicago’s Democratic leadership has spent 1.6 billion dollars to demolish public housing, but only about 20% of former low-income residents may be given the chance to return. In other words, there is ample evidence showing that decline in school enrollment was intentionally engineered, it’s been part of “the plan” for quite some time (see: Making Sense of Renaissance 2010 School Policy in Chicago: Race, Class, and the Cultural Politics of Neoliberal Urban Restructuring).

Put another way, Chicago’s poor seem to have been “set up.” The Windy City’s leaders had billions to spend, which they could have used for supporting and investing in poor communities, but instead the public housing demolitions and subsequent school closings were set in motion. What also rarely gets mentioned is that directly east of where the largest cluster of public schools are being closed there is the massive and well-funded Lakeside Development Project (made possible by an “international consortium of organizations“), which has been in the works for much of the last decade.

All the evidence points to a well-crafted and hidden agenda of destablizing and depopulating poor communities for the purpose of financial gain and “urban restructuring.”

Chicago’s business and government leaders appear to be creating an investment and development “opportunity” like in South Beach, Miami, where since the mid-1990s a whole sector of low income beach-front neighborhoods were bought up and redeveloped into a high-class shopping and hotel district, or like New Orleans, where Hurricane Katrina provided the perfect “storm” of conditions so that urban schools and homes could be dismantled and then “redeveloped” more easily.

According to Leslie Fenwick, Dean of Howard University’s School of Education, this is exactly what is going on:

“Urban school reform is not about schools or reform. It is about land development. In most urban centers like Washington D.C. and Prince George’s County, black political leadership does not have independent access to the capital that drives land development. These resources are still controlled by white male economic elites.

Additionally, black elected local officials by necessity must interact with state and national officials. The overwhelming majority of these officials are white males who often enact policies and create funding streams benefiting their interests and not the local black community’s interests.

The authors of “The Color of School Reform” affirm this assertion in their study of school reform in Baltimore, Detroit and Atlanta. They found: “Many key figures promoting broad efficiency-oriented reform initiatives [for urban schools] were whites who either lived in the suburbs or sent their children to private schools.”

Local control of public schools (through elected school boards) is supposed to empower parents and community residents. This rarely happens in school districts serving black and poor students. Too often people intent on exploiting schools for their own personal gain short circuit the work of deep and lasting school and community uplift.

In the most recent cases of Washington D.C. and Chicago, black parents and other community members point to school closings as verification of their distrust of school “reform” efforts.

Indeed, mayoral control has been linked to an emerging pattern of closing and disinvesting in schools that serve black poor students and reopening them as charters operated by education management organizations and backed by venture capitalists [and] external white elites who are exclusively committed to using schools to recalculate urban land values at the expense of black children, parents and communities.”

Co-creator and Admin of the Facebook pages "Tao & Zen" "Art of Learning" & "Creative Systems Thinking." Majored in Studio Art at SUNY, Oneonta. Graduated in 1993 from the Child & Adolescent Development program at Stanford University's School of Education. Since 1994, have been teaching at Seinan Gakuin University, in Fukuoka, Japan.
View all posts by Christopher Chase →
This entry was posted in Creative Systems Thinking and tagged chicago, education, education reform, land grab, learner-centered education, school reform. Bookmark the permalink.

3 Responses to Are Chicago’s School Closings Really a Land Grab?